Continuing the series of posts about the FlareOn reversing challenges 2015 [1]. If you interested, you can find my previous post with solutions for the first three challenges here [2].
I had some "extra work" due to infra-structure issues during this challenge and ended up learning new things. So I decided to dedicate a whole post for the challenge #4 not only explaining the solution but also explaining these issues.
.::[ PREAMBLE
As the previous challenges the objective in this task is to recover the flag (an e-mail address) from a PE-32 binary file. The main insight for this challenge is that the binary was packed using UPX [3]. There are many ways to raise evidences that a binary was packed using UPX, the main is to examine sections. We could obtain this information using rabin2 by the following command. Figure 01 shows the sections labels for the analyzed binary.

As we can notice there are 2 sections (marked with the red rectangles) called "UPX0" and "UPX1". These sections are used by UPX to store compressed data of the original binary.

UPX standard package offers an utility to unpack the packed binary. Basically this tool reads the UPX headers (out of the scope for this post) and extracts the original binary to an output file. The main advantage of using UPX is to reduce the size of an executable by compacting it. This compressed version of the binary is uncompressed in memory and executed during run-time. This means that the packed executable has the decompression algorithm and a mechanism to change the execution flow to the uncompressed version of the binary during execution time.
.::[ UNPACKING UPX
At this point we already know that we have an UPX packed binary. The binary executes perfectly packed at our test environment (Microsoft Windows 7 - 64 bits). The issues happens when we tried to unpacking and executing the resulting unpacked binary using this Virtual Machine. Surprisedly the resulting unpacked binary does not work anymore. Figure 02 shows the command line used to unpack the challenge and the checksum for the unpacked version of the binary.
Figure 03 shows the error presented when we tried to execute the unpacked version of the binary.
This was very curious, we analyzed the unpacking code and the uncompressing routine was fine. Then we decided to execute the unpacked binary in different platforms, such as:

.::[ ISSUE ANALYSIS
After loading the unpacked version of the binary on IDA we could notice that the executable was compiled by using some version of Visual C with the flag "GS" active [4][5]. This flag tells the compiler to inject code to check the software against buffer overflows. The code implements a set of cookies based routines to check if the boundaries of variables are not violated. Figure 05 shows the code inserted by the compiler used to generate this security cookie.


Why we are talking about this? Because the debugger reports a memory access violation when the program tries read the security cookie initialized and stored inside the data segment by the function  "__init_security_cookie()". Figure 06 shows the exception triggered by the debugger and the defective code.

An interesting behavior is that the code is modified when executed from: 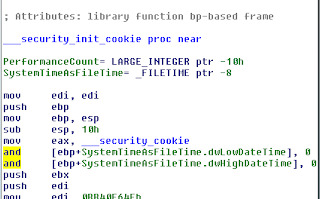 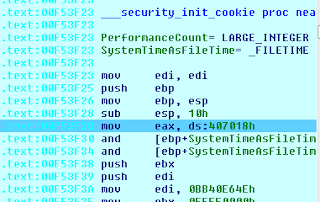 This runtime change is causing the error because the register DS (Data Segment register) is not initialized with the base address for the Data Segment. Well, the Data Segment Register should be filled dynamically according the Relocation Table [6][7] and is used for ASLR [8]. The problem is that the binary does not have Relocation Table (probably striped by UPX) and was compiled with the ASLR flag.  This information can be confirmed by looking at the PE structure by using CFF Explorer [9] and Process Explorer [10].  Figure 07 shows the information about ASLR flag at Process Explorer. As we can see the process has the ASLR flag active.

We can double check and edit characteristics of the binary by using CFF Explorer. Figure 08 shows this same information ASLR flag on CFF Explorer but this time this tool was used to unset this flag.

.::[ CHALLENGE 04 - HIGH LEVEL BEHAVIOR
No more obscure errors, now we can finally focus on the challenge. The first thing to notice in this challenge was the presence of UPX. Another interesting characteristic is the difference of output between the unpacked and the packed version. The only reason for such thing is that the unpacking algorithm is modifying the unpacked binary during execution time. After analyzing the end of the algorithm used for unpacking the original code, just before redirecting the execution flow for the Original Entry Point, some routines was injected to modify the unpacked binary. There are 2 modification routines:


Figure 10 shows the changes made by the modified version of the UPX unpacking algorithm over the packed binary. It is possible also to see the jump to the Original Entry Point at address "0x408621" this instruction changes the execution flow to the beginning of the UPX0 section.

In order to use the unpacked version of the binary for analyzing the challenge it is necessary to manually patch the unpacked binary and add the modification code injected inside the unpacking algorithm.

By now we have restored the original binary and we are ready to start to analyze what is necessary to solve the challenge.

The first thing to notice is the verification code to check if the binary was unpacked properly. This code checks if the static string located inside "0x0040525c" (labeled as "Str" by IDA) is not equal to "5". Remembering that the customized unpacking algorithm replaces this string with "4" during execution time. The routine calls the function "atoi()" to transform this string in a integer and makes the comparison. Figure 12 shows the unpacking checking routine.

The second thing to notice is that the binary expects a parameter. Figure 13 shows the routine which checks the number of parameters passed to the binary.

The third relevant code is the call to the the function "localtime64()" which returns a structure containing the current time at the system. Figure 14 shows the code which calls this routine.  Another interesting thing to notice at this routine is a code to calculate a MD5 hash of the inputed parameter (first red rectangle).  The function "sub_4012E0" calculates this MD5 hash.
At this point we know that the binary receives an integer parameter with maximum 8 bits (because the mov instruction receiving "al"). Well we could just ignore the rest of the code and brute force the binary with values between 0 and 256. This can give us the flag and solve the challenge. But our target is understanding the behave of the code then we should move on.

The next characteristic is that the binary collects the local hour at the system and user this integer to as an index for an array containing 24 strings encoded with Base64. Inside each component of this array has an encoded MD5 hash. This hash is compared with the MD5 hash calculated by using the input argument; if it does not match the binary exits.  Figure 15 shows the code responsible for collecting the hour in the host system.

Figure 16 shows the function responsible for using the current hour for indexing the array with the hashes in Base64 format.

The challenge is solved but we still want to understanding the rest of the analyzed binary.  Well by observing the graph generated by IDA we can observe that the _main function flow structure can give us some hints. Figure 18 shows the flow graph of the main function calculated by IDA. We can observe that the main function has basically 2 sequences of code with 24 functional blocks each.
The first set of blocks is responsible to building the vector containing the encoded hashes for numbers between 1 and 24. This is used to verify if the user is inserting the expected time as a parameter to the binary. The second set of blocks builds another vector containing an encrypted version of the flag for each hour. The hash representation of the hour is used as a XOR key for decrypting the flag. Figure 19 shows the final decryption routine which is used to recover the flag.

PS: during my journey to understanding how relocation tables works, I found a very interesting article about code injection [11].